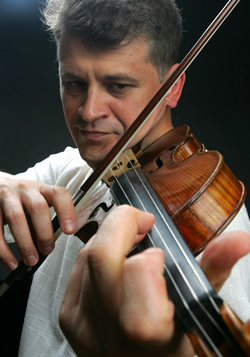 Ion Mazur was born Ionuț Măzăreanu in Iasi, Romania. His mother and father were music theory teachers and his father was also a very prominent Children's Choir Director. Mr. Mazur began studying violin at the age of seven.

At fourteen, Mr. Mazur had his debut with the "Moldova" Philharmonic Orchestra in his hometown with the Wieniawski's "Polonaise Brilliante" orchestrated by his violin teacher, Ioan Morna. There, for seven years he performed Wieniawski Concerto No. 2, Paganini Concerto No. 1, and Sibelius Violin Concerto as well as other popular and technically demanding works.

At 16, he began violin studies with the famous Romanian teacher, Stefan Gheorghiu in Bucharest. Soon after, Mr. Mazur participated in and won several first place awards including first prize in the National Conservatory Competition in Iasi and Targu-Mures. He performed with the Bacau, Botosani, Arad and Sibiu Symphony Orchestras. He gave several recitals in the Piatra-Neamt Museum of Art and was a semifinalist in the "Premio Rodolfo Lipizer" International Violin Competition Gorizia (Italy).

After receiving a diploma from the "George Enescu" National Academy of Music in Iasi, Mr. Mazur left Romania and settled in France. He performed a recital in Nancy with the pianist Jean-Pierre Schmitt at the "Musée des Beaux-Arts". He also performed the Mendelssohn Violin Concerto with the Nancy Symphony in the "Hotel de Ville" Hall.

At 26, Ion Mazur went to New York and was accepted by Dorothy DeLay at the Juilliard School in the Masters Program. In Juilliard he studied Chamber Music with Samuel Sanders. Then, he continued to study with Ms. DeLay and Piotr Milewski at the College-Conservatory of Music, University of Cincinnati where he performed Prokofiev Violin Concerto No. 2 with the "Starling Orchestra" conducted by Kurt Sassmannshaus. There, he also performed Wieniawski's "Concert Polonaise" with CCM Orchestra conducted by Peter Oungian with whom he studied Chamber music as well. In the Aspen Music Festival, he performed the second Violin Concerto by Prokofiev with the Young Artists Orchestra conducted by Peter Jaffe.

He performed Vivaldi's "Four Seasons" in a tour in Italy with the “Soloists of Bucharest” conducted by Fabio Brunelli.

As he holds a Certificate in IT, Mr. Mazur continues to develop new repertoire and explore the rich and historical connections between music and technology.